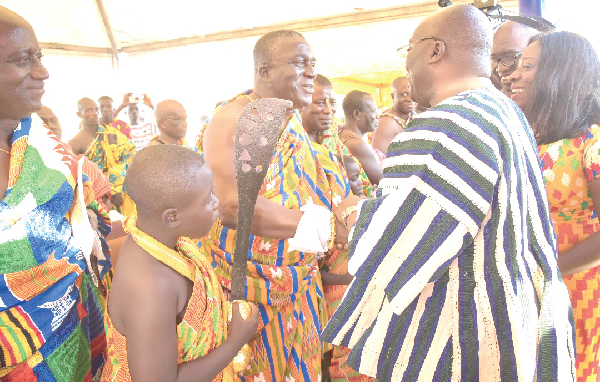 Nana Kobena Nketsiah V,Omanhene of the Essikado Traditional Area welcoming Vice-President, Dr Mahamudu Bawumia to the durbar to round off the festival
The Vice-President, Dr Mahamudu Bawumia, has given an assurance that the government is working around the clock to ensure that communities, and by extension the entire country, get maximum returns from the extraction of mineral resources.

According to him, the latest approach was to move away from the present situation where the country exported its minerals raw to one in which value was added before export.

A statement from the Office of the Vice-President said he gave the assurance when he addressed the chiefs and the people of the Essikado Traditional Area in the Western Region at this year’s celebration of the Kundum Festival last Saturday.

“We have not really benefited from the extraction of our natural resources and it is for this reason that we need a new paradigm shift, especially in the case of our mineral wealth. We need to think anew as to how the country can benefit from our mineral resources,” he stated.

He noted that “There are many mines that are operating in the country and for years they tell us they have not made any profit and so they cannot pay dividend to the government but they keep mining and mining,” he noted.

The statement said Dr Bawumia indicated that a new fiscal regime similar to the one prevailing in the oil sector would soon be introduced in the mining sector.

“We have a regime that we are implementing for the oil sector and we want to implement the same regime for the mining sector. So when you take 1,000 tonnes of gold from the soil, you will have to pay us our share out of that. We will not wait for you to go and say you have not made any profit out of the 1,000 tonnes and so you will not pay us anything. You will have to pay us something commensurate to what you have taken out,” he emphasised.

Touching on investments, Dr Bawumia reminded the investor community that while the government welcomed foreign direct investments, such investments would have to be a partnership that was beneficial to all parties.

That, he explained, was the guiding principle behind the decision to leverage a fraction of the country’s vast bauxite deposits to build an integrated bauxite and aluminium industry.

“We have decided that we are not going to allow what has happened to gold and manganese to happen with bauxite. Parliament just passed the Ghana Integrated Bauxite Authority Bill. We are forming this corporation and will be forming partnerships with anybody who comes for a joint venture to build an integrated bauxite and aluminum industry.

“We don’t want the raw bauxite to be taken out. We will build a refinery here to refine the bauxite to alumina, take it to VALCO and get aluminum and you will see the massive increase in value. This is going to be transformational,” the Vice President stated.

The statement said Dr Bawumia commended the Omanhene of the Essikado Traditional Area, Nana Kobena Nketsiah V, for his continuous drive and contribution towards a better Ghanaian society and called for the sustenance of the peace and unity among the people of Essikado.