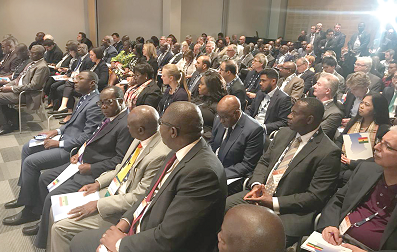 The international launch of Ghana’s first upstream oil and gas licensing round in Cape Town, South Africa, was received with high interest, as representatives of global oil giants rushed for sitting places at the event.

Ghana has just opened bids for six out of nine oil blocks in the Cape Three Points basin near the Western Region for allocation through competitive tendering process.

The much-publicized launch at the Africa Oil Week in Cape Town brought almost all activities to a standstill as representatives and chief executives of global energy giants trooped to the well-packed hall for more details on application process.

The Minister of Energy and Petroleum, Mr John Peter Amewu, visibly amazed by the show of interest in the country, urged existing partners and potential investors to formally signal their entry into the licensing round by submitting their expression of interest by December 20, 2018.

The minister said implementing the licensing round was rooted in the country’s resolve to become one of the leading producers of oil and gas in Africa.

“In the short to medium term, our objective is to promote an aggressive oil and gas exploration with the view to replacing our reserves, increasing production and generating revenue to finance our ambitious development programmes,” he said.

“We are further encouraged by our national industrial agenda that targets the development of Ghana into a regional petroleum hub for production, refining, storage, transportation and marketing of petroleum products,” he said.

Mr Amewu said the concept was to promote petrochemical and agrochemical production “to add value to our resources, increase economic growth and create jobs for our people.”

He said while oil and gas contributed significantly to achieving the country’s development agenda, “we also know that the need to discover more oil and gas cannot be taken for granted.”

“Our quest for development requires an enabling and competitive fiscal regime, massive investment and economic infrastructure for harnessing this great potential,” Mr Amewu said and added that the licensing round provided an opportunity to evaluate the competitiveness of the country’s investment environment for the oil and gas industry.

The energy minister explained that there were several discoveries in the Western sedimentary basin, making it highly prospective. The basin houses the Jubilee, TEN fields and the OCTP block.

“This simply means that the areas on offer have largely been de-risked,” Mr Amewu added.

The basin, he said, also had first class including assets, production, storage and pipeline infrastructure that could be leveraged to shorten the length of time from discovery to first oil in the event of new finds.

Mr Amewu gave an assurance that Ghana had peaceful relationships with neighbours and that following the resolution of the maritime boundary dispute with Cote d’Ivoire, exploration activities were continuing in the Western basin without challenges.

“It is, therefore, my pleasure to repeat my earlier call on you our investor friends to participate in this licensing round to the end. I would like to encourage you to make Ghana your preferred destination for oil and gas investments,” he said.

Ghana’s political stability, conclusive fiscal regime, sanctity of contracts and higher regulatory standards, the minister said, were some of the reasons that should compel investors to consider doing oil and gas business in Ghana.

He added that as a demonstration of the country’s determination to expand opportunities and benefits for its people, the government had taken the strategic decision to invest in infrastructure that could add value to the economy and create jobs for the people.

“We are reviving the Tema Dry Dock and Shipyard and we’re building our fabrication capacity to manufacture top sides of FPSOs, build supply vessels and in future undertake FPSO integration in Ghana,” he said.

The Chief Executive Officer of the Petroleum Commission, Mr Egbert Faibille Jnr, and the Chief Director of the Energy Ministry, Mr Lawrence Apaalse, took turns to explain the country’s laws on petroleum activities and shared the prospects of the Western basin to the investors. 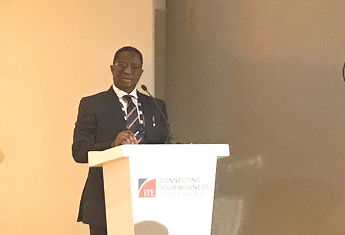