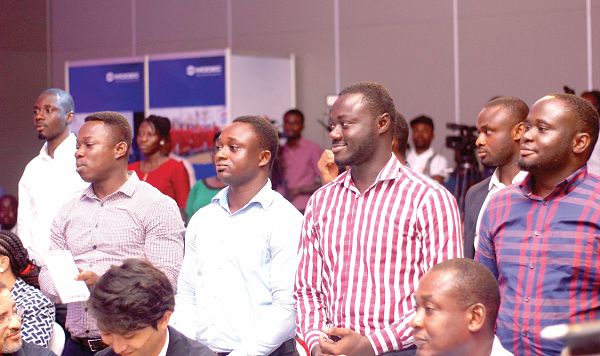 Some beneficiaries of the programme. Picture: NII MARTEY M. BOTCHWAY

The Deputy Minister of Energy in charge of Finance and Infrastructure, Mr Joseph Cudjoe, has reiterated the importance of training Ghanaians to build the needed competencies to take over the upstream oil and gas sector.

He said the growing chorus in many emerging oil and gas countries was to train the locals instead of bringing in expatriates to work. At the inauguration of the MODEC Production Services Ghana JV Limited (MPSG) and MODEC do Brazil Secondment Training Programme for selected staff in Accra, he said in a few years to come, training of locals to take over the industry would become a competitive tool for companies in the sector.

“There is a kind of chorus that is emerging strongly, saying ‘train the locals to participate actively in the industry, rather than bringing in expatriates into the local industry,’” he said.

MODEC, he said, could see the initiative as an opportunity to use Ghana as a reference point where it could change the game in terms of compliance with local content laws and training the indigenes to participate actively in the sector. “We are looking at a win-win and in that context we are very supportive of any initiative that creates wealth for the company itself and for the country,” he said.

The acting Chief Executive Officer of the Petroleum Commission, Mr Egbert Faibille Jnr, said the commission received an application from MPSG to allow expatriates to come into Ghana to work on their assets. “The commission in return requested that Ghanaians also be trained to build the needed competencies, the result of which is being witnessed with the inauguration of the training programme,” he said. Mr Faibille Jnr said the Petroleum Local Content and Local Participation Regulation, 2013, LI 2204 enjoined companies to train Ghanaians and to ensure technology and skills transfer to Ghanaians.

“We received a request from MODEC to bring in about 15 expatriates to come and work on their assets here in Ghana. After discussions, we told them to bring in their expatriates, but then make sure we also take 16 Ghanaians to Brazil. “So for the period that the expatriates are here, doing what they have to do for your assets, at least some Ghanaians will be in Brazil to learn how to operate these things at the levels they are competent and qualified so to do,” he said. Mr. Faibille also advised MODEC staff to use the opportunity to increase their respective individual and collective capacities to be able to impart to others.

The government, he said, was very much committed to training and empowering Ghanaians to take their rightful place in the upstream space. “The government is committed to localization of roles. We will welcome expatriates in our space because there are also Ghanaians working elsewhere in the world but our goal is to ensure that we also train our people so that they can be one of the best in the upstream oil and gas space all over in the world,” she said.

About 16 local staff from MPSG in the onshore unit are taking part in the six-month residential training programme to be delivered by MODEC do Brazil. The selected staff will go in three batches, with each batch studying for six months. The first batch is expected to start their training in February 2019, with the second batch leaving in May and the final batch joining in September. The Localization Manager, MPSG, Dr Papa Benin, said the staff were selected based on performance and core skills level. “The trainees span across all the departments of MODEC from the onshore unit,” he said.

The Managing Director of MPSG, Mr David Gleave, said the inauguration of the training signalled a big milestone in the company’s people development and localisation agenda in Ghana. Describing people development as the centre of the company’s operations and its success, he said the company was focused on developing people with specific interests and had, thus, over the years pursued localisation of expertise in its operations.

“The company has also introduced a number of training programmes to harness the skills of local staff. We have also trained mechanical engineers to take opportunities on both Floating Production Storage Offloading (FPSO) Kwame Nkrumah and John Evans Atta Mills to replace expatriate positions in future,” he said. The six-month residential training programme, he said, was designed to provide the right skills set needed on the job to enable their staff to carry out their current roles effectively while preparing for future opportunities. “This will fast-track the skills development required for our operations in Ghana and also signal another good step in our localization agenda,” he said.