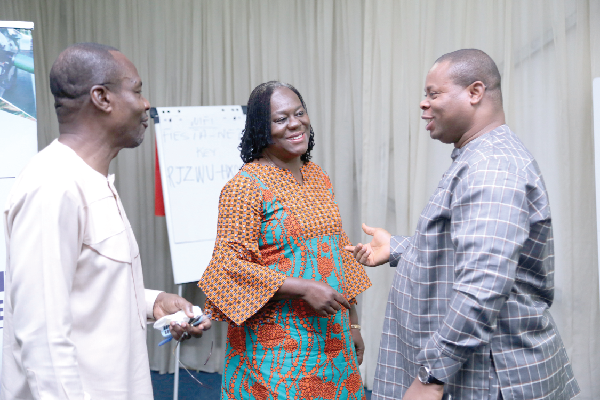 The Public Interest and Accountability Committee (PIAC) has started engaging the Auditor-General and other public accountability institutions to enforce sanction regimes and prosecute people who misuse oil revenue.

A comprehensive report by the committee on the use of oil revenue over the last seven years revealed that there had been no value for money in the projects that were executed in priority sectors such as education, health, agriculture and road infrastructure.

At a public engagement with think tanks and other stakeholders in Accra yesterday, the Chairman of PIAC, Dr Steve Manteaw, said the committee had already contacted the Auditor-General to further conduct audit investigation of the projects and take steps to prosecute persons who had, in various ways, misused oil revenue.

The forum was attended by think tanks, including representatives from civil society organisations (CSOs) such as IMANI Africa, the Institute of Democratic Governance (IDEG), Centre for Democratic Development (CDD), Africa Centre for Energy Policy (ACEP) and the Ghana Anti-Corruption Coalition (GAC).

Dr Manteaw said PIAC had come up with several reports on the misuse of oil revenue over the last seven years but the recommendations had not been acted on by the appropriate bodies.

“The mandate of PIAC will not be fully served if we just restrict ourselves to making disclosures without ensuring that the recommendations are actually implemented.

So we are also collaborating with institutions that have prosecutorial powers such as the Commission on Human Rights and Administrative Justice (CHRAJ), Economic and Organised Crime Office (EOCO) and the Office of the Special Prosecutor to prosecute people who misuse oil revenue,” he said.

He said the committee had engaged other stakeholders in the oil and gas sector, especially those that had been clothed with the mandate to manage and use petroleum revenue, on the way forward to ensure accountability in the use of the funds.

“We are trying to make a critical transition from transparency to accountability because that is the only way we can have a lasting benefit of oil revenue for the future generation,” he asserted.

The Petroleum Revenue Management Act 2011 (Act 815) makes provision for 70 per cent of the net oil revenue to be spent on priority areas, while the remaining 30 per cent is to be invested in the Stabilisation and Heritage funds at 21 and nine per cent respectively.

In 2017, about GH¢700 million of the oil revenue was allocated as the Annual Budget Funding Amount (ABFA) and approved by Parliament to be expended.
However, Dr Manteaw said PIAC had discovered that only GH¢300 million of the ABFA for 2017 was expended, while the remaining GH¢400 million had not been accounted for by the Ministry of Finance.

“This development raises questions about budget compliance. The money was available but there is no record on the unspent GH¢400 million.

PIAC has written to the Ministry of Finance but we are yet to get any acknowledgement of the receipt of the letter or any response on what is being done.

We will take it to the next level,” he stressed.

Meanwhile, the Vice Chairman of PIAC, Dr Thomas Kojo Stephens, said a general overview of the projects executed using oil revenue over the last seven years showed that most of the projects did not exist, while others did not meet quality test.

For instance, he said, ‘‘PIAC inspected 40 oil-funded projects in 2017 and has so far visited the site of 25 others this year, but it was clear that there is no value for money because most of the buildings and roads have been shoddily done.”

He observed that there was the need for strict guidelines to be followed in the selection of priority projects, adding that efficient accountability regimes ought to be put in place to ensure value for money.