The AngloGold Ashanti (AGA) Obuasi Mine bounced back into operation on Tuesday, January 22, 2019, with a major redevelopment after a four-year shut down.

An amount of $881 million was invested in the initial redevelopment project, with $1.6 billion projected for investment in the 22-year life span of the mine.

The project is expected to generate about 2,500 jobs.

President Nana Addo Dankwa Akufo-Addo, joined by the Asantehene, Otumfuo Osei Tutu II, cut the tape to reopen the mine, to rapturous applause from a gathering that included officials of the company, the chiefs and people of the Adansi area and well-wishers.

To the President, it was a promise come true, as he had made a pledge in the run-up to the 2016 general election to see to the revival of the one-time buoyant company whose operations, unfortunately, took a nose-dive, leading to its eventual closure in 2014.

For the people of Obuasi and, by extension, the Adansi area in the Ashanti Region, they have every reason to rejoice over the return of the company that was once the life blood of the area.

Addressing the gathering, President Akufo-Addo noted that  when he assumed office, a series of discussions and negotiations took place, which resulted in the redevelopment project of the Obuasi Mine.

“In order to help AngloGold Ashanti secure the needed investment for this project, the government had to provide a number of fiscal incentives and guarantee the stability of the project against changes in the legal environment, especially in the early years of the mine’s operations.

“It is expected that all the agreements reached, including the vigorous implementation of domestic content policy, will be scrupulously honoured and performed. The initial investment in the redevelopment project is $881 million, with a total investment of $1.6 billion projected for the entire 22-year life of the mine. The whole investment package has been approved by Parliament,” he explained.

With the expected thousands of jobs to be created by the reborn mine, the President expressed confidence that Obuasi, a once vibrant town, would be brought back to life again, with an improvement in the living circumstances of its residents.

President Akufo-Addo noted that the government was expected to rake in about US$2.16 billion in revenue over the next 22 years, in royalties and corporate and withholding taxes.

“I assure the management and staff of the mine that the sequence of events that led to the closure of the mine will not recur under the watch of this government. The days of forcible encroachment on the concession of the company, as witnessed between 2010 and 2016, are over,” he added. 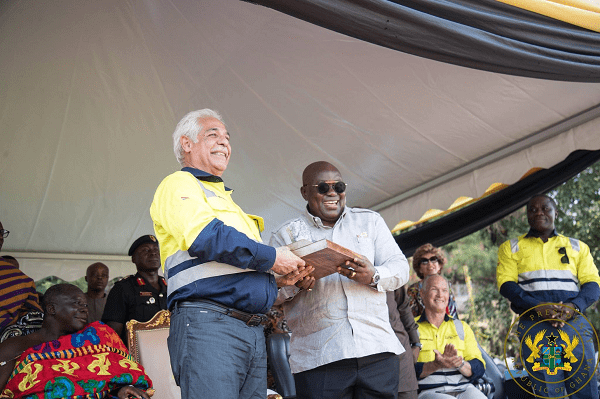 Touching on the “distressed state” of Obuasi, the President indicated that the time had come for Obuasi to reflect the fact that it hosted the richest gold mine in the country and one of the richest in the world.

He acknowledged the fact that mining companies had, over the last few years, complemented some of the work of the government in driving national development.

He said it was expected the AGA would do more this time to help transform Obuasi and bring it at par with well-developed mining communities in other parts of the world.

“When the government and mining companies collaborate in an intelligent and sustainable manner, more can be done to transform mining communities. I have no doubt that Anglogold, under its current management, will be a constructive partner in this journey,” President Akufo-Addo stated.

Touching on the lifting of the ban on small-scale mining, the President indicated that with a considerable degree of success, the government had been able to streamline and regulate the small-scale mining sector.

“We are determined to ensure responsible mining and I appeal to you, Nananom, to help the government in securing for future generations a landscape and vegetation on which they can also survive and thrive. I am happy to say that, today, people are fishing again in one of the famous rivers of our country, the Ankobra,” he said.

As captured in the 2019 budget, he told the chiefs and the people that contract for the construction of the Obuasi-Anhwia-Nkwanta road had been awarded to Joshob Construction Limited, which was already on site working.

“Again, the government will soon accept the Assets Relinquishment Plan of Anglogold Ashanti, which will pave the way for the start of the proposed Obuasi Campus of the Kwame Nkrumah University of Science and Technology,” he said.

The Asantehene said it was unfortunate that a company that provided jobs for thousands of people and contributed to the economic development of this country had to be closed down for four years.

The closure, he said, led to untold hardship and a decline in living standards of the people of Obuasi.

Otumfuo Osei Tutu said he was happy that the mine was bouncing back to life to revive the town and bring back smiles to the faces of people.

He said the redevelopment project had a huge implication for the future of the nation and that it should be an important signal to the world that the climate for doing business had never been brighter.

“And it should instil further confidence in our people that the promise of a stronger, more vibrant economy providing more jobs for the people is being realised,” he said.

He, however, warned that “we should not be lured into a premature sense of security, for the challenges of the past have not gone away and we should expect even more challenges as we move forward”.

For his part, the Minister of Lands and Natural Resources, Mr Kwaku Asomah-Cheremeh, described the launch of the redeveloped AGA Mine as a major milestone that would turn around the economic fortunes of the company and the local economy.

He said adherence to the local content law would translate into 24 per cent of the total revenue of the company over the next 22 years, while generating about 2,500 employment opportunities for the host communities.

Mr Asomah-Cheremeh called on the host communities to put the past behind them and extend goodwill to the company for the mutual benefit of the two parties.

He also urged the workers of the company to adopt sustainable mining practices that would not destroy land and water resources.

The Executive Vice-President in charge of Technical Services at the Obuasi Mine, Mr Graham Ehm, said the redeveloped mine had the initial capacity to produce 200,000 ounces of gold daily, with a potential to hit 400,000 ounces when the expansion work was completed.

He gave an assurance that the company would continue to mine in a sustainable manner to ensure that its operations did not pose health and environmental threats to the host communities.

In terms of corporate social responsibility, he said, it would commit more resources to projects that would improve education, health care and livelihood support for the local people.