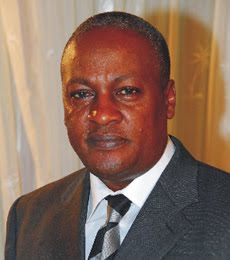 Vice President John Dramani Mahama on Tuesday said Ghana would collaborate with the Norwegian government to ensure effective management and use of revenue from oil and gas.

He said the Norwegian sense of equity and justice exhibited in their oil industry over the years was worth replicating in Ghana for the benefit of the people.

Vice President Mahama said this when Crown Prince Haakon and Crown Princess Mette-Mariti of Norway called on him at the Flagstaff House in Accra.

The Crown Prince and Crown Princess, who are on a six-day official visit to the country, would launch a Memorandum of Understanding signed between the two countries last year and hold discussions in areas of energy, environmental protection, revenue management and capacity building.

Their visit would also strengthen relations between the two countries towards the opening of an Embassy in Accra in August.

Vice President Mahama said as an emerging oil and gas country, Ghana would learn both positive and negative sides of oil exploitation and production in order to avoid the recurrence of the negatives and build on the gains from other countries.

Crown Prince Haakon gave the assurance that Norway would be ready to assist Ghana to achieve all their goals in the oil and gas industry.

He said with good collaboration and cooperation between the two countries, Ghana should be able to manage oil revenue effectively,harness other potentials and build the capacity of Ghanaians to manage the country’s resources.

The Crown Prince said apart from oil and gas, peace building and environmental protection, Norway would also strengthen its relationship with Ghana by investing in energy to create more jobs for Ghanaians.