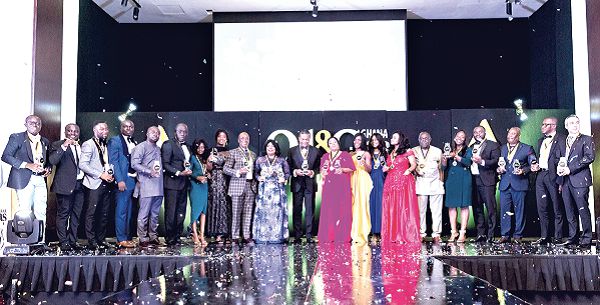 The award winners displaying their plaques at the ceremony

Thirty-two Oil and Gas companies in the country were last Saturday, honoured at the 2018 Oil and Gas Awards for their outstanding performances and contribution to the growth of the industry in 2018.

Special recognition awards were also conferred on individuals for their remarkable innovative leadership skills that improved the image and output of the sector at the fifth edition of the awards, organised by Xodus Communications.

The Local Content Initiative Award went to Modec Production Services Ghana JV Ltd, the Oil and Gas Institution was presented to Rigworld Training Centre and the Marketing Campaign of the Year to Total Troxi Club.

J. K. Horgle Transport and Company Limited and TechnipFMC took the Excellence in HSEQ Upstream and Downstream, respectively, while the Emerging Brand and Brand of the Year were conferred on Puma Energy and Vivo Energy, respectively.

Star Assurance Company Limited was adjudged the Oil and Gas Insurer, Institute for Energy Security, the Policy Activist and Manbah Gas, the Petroleum Retailer of the Year.

Special awards were also conferred on some individuals for their outstanding contribution to the industry.

They are the Rising Star Award which was given to Ms Elinam Abla Horgli, Entrepreneurial Excellence Award to Emmanuel Egyei-Mensah, Lifetime Achievement Award to Alfred Fafali Adagedu of the Seaweld Engineering Services, Leadership Award to the CEO of the National Petroleum Authority, Mr Alhassan Tampuli, Young Achiever Award to Mr Kevin Okyere and Woman of Excellence to Ms Ivy Manly-Spain.

The Outstanding Contribution to Oil Discovery in Ghana was conferred on Mr George Yaw Owusu.

Earlier in his welcoming address, the Event Director, Mr Richard Abbey Jr, said the awards were meant to recognise people for their outstanding hard work and contribution to the growth of the oil and gas sector.

He stated that the awards had been able to spur enormous competition in safety compliance, stewardship, corporate social responsibility, building capacity to improve their businesses both in the downstream and upstream of the oil and gas industry.

“The essence of the awards is to see people rise from where they are and get to another level,” he said, expressing pride that more indigenous companies in the sector won more awards in spite of the fact that the industry was dominated by foreign firms.