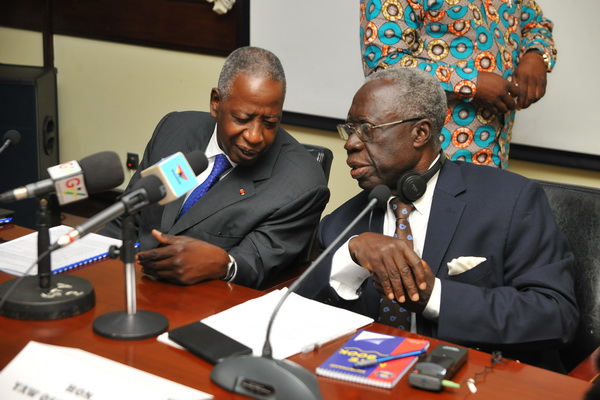 Ghana and Cote d’ Ivoire on Thursday started a two-day consultative meeting in Accra to deliberate on outstanding issues holding up the implementation of the ruling by the Special Chamber of the International Tribunal for the Law of the Sea (ITLOS) on the maritime boundary dispute between the two countries.

The 16-member implementation committee of Ghana, which include the Attorney General and Minister of Justice, Ms Gloria Akuffo, the Minister for Foreign Affairs and Regional Integration, Ms Shirley Ayorkor Botchway and representatives of the Ministries of Defence, Energy, Lands and Natural Resources, the Petroleum Commission and the Ghana National Petroleum Corporation (GNPC), is led by the Senior Minister, Mr Yaw Osafo-Maafo.

The delegation from Cote d’Ivoire is led by the Minister of Petroleum and Energy, Mr Adama Toungara, together with officials from ministries, organisations in the energy sector and security services.

Mr Osafo-Maafo said the meeting, which was a follow up to an earlier meeting held in May 2018 at Abidjan, Côte d’Ivoire, was part of the process towards a smooth implementation of the judgement.

At the meeting in Abidjan, he said Côte d’Ivoire shared with Ghana a document on the plotting of the coordinates in accordance with the ITLOS decision of the maritime boundary between the two countries on a nautical chart at a scale of 1:1 million.

The two countries, Mr Osafo-Maafo said, had since reviewed in detail the plots and have agreed on them.

Additionally, the two countries proposed that two technical teams worked together to validate the plotting of the ITLOS coordinates as presented by Côte d’Ivoire.

Mr Osafo-Maafo expressed the hope that the plotting of the coordinates of the maritime boundary between Ghana and Côte d’Ivoire would provide the requisite launchpad for the implementation of the Strategic Partnership Agreement (SPA).

“We hope to have fruitful deliberations on all the outstanding issues to consolidate the already existing bilateral relationship between Ghana and Côte d’Ivoire,” he said.

Apart from the maritime boundary, Mr Osafo-Maafo said there were other issues that would affect the cocoa, mining and other sectors which would require a multisectoral engagement.

Mr Toungara, for his part, expressed the hope that the meeting would strengthen the age-old ties between the two countries.

He reaffirmed the commitment of Cote d’Ivoire to cooperate with Ghana to fully implement the road map for an efficient exploitation and utilisation of maritime resources.

Mr Toungara was also confident that the outcome of the joint committee meeting would meet the expectations of the Presidents.

A protracted maritime dispute between Ghana and Cote d’Ivoire was settled on September 23, 2017 when the ITLOS ruled that Ghana had not violated the sovereign rights nor trespassed into the marine boundary of Cote d’Ivoire with its oil exploration in the Western Region of Ghana.

The meeting in Accra, therefore, is a follow up to an earlier meeting held in May this year in Abidjan, the Ivorian capital, as part of the processes towards a smooth implementation of the judgement by the ITLOS.