Oil exploration and production (E&P) companies will not pay the government any corporate income taxes (CIT) in 2018 after getting approval to recoup the about US$11.9 billion that was invested in the Tweneboa, Enyenra and Ntomme (TEN) and the Sankofa Gye Nyame fields.

Out of the amount, US$4.9 billion belongs to partners of the TEN fields, which started production in August last year, while US$7 billion will be recouped by part owners of the oil and gas integrated field, the Sankofa Gye Nyame project.

The companies are to recover the total allowable expenditure over a five-year period (20 per cent per annum) as captured in the various petroleum agreements.

As a result, the government, for the second time running, did not budget for CIT in the 2018 Budget and Economic Policy Statement presented to Parliament on November 15, this year.

One source familiar with the process told the GRAPHIC BUSINESS in confidence that amortisation of capital investments and payment of the country’s share of the initial investments started “immediately after the two fields started production (August 2016 for TEN and July 2017 for OCTP).”

This means that every profit made will be used to offset the investment earmarked as capital costs – initial expenditure prior to the start of production that should be recouped.

“You know that we don’t put in upfront cash when we are developing the project; the partners invest on our behalf and when we start producing and we sell, then we pay them back.

“In the case of TEN and Sankofa, you don’t expect any corporate tax because we are now paying our costs and the partners are also amortising their capital over five years,” the source said. 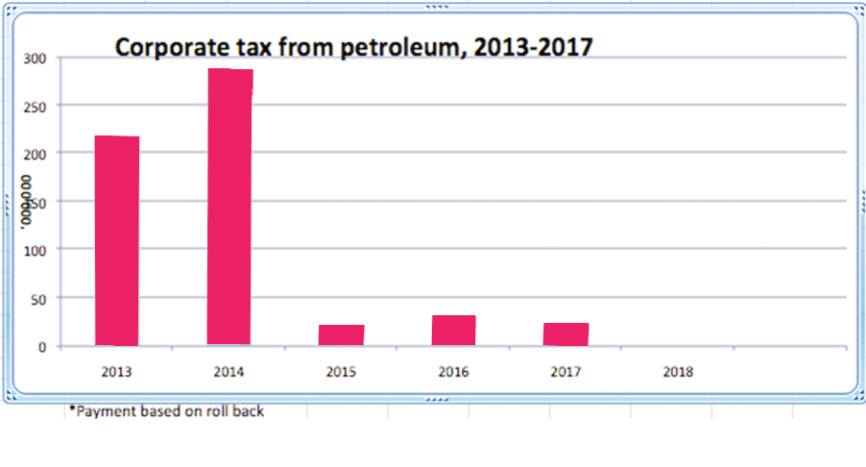 Although that has since ended, the source said the petroleum agreement covering the operations of the TEN and the Jubilee fields allowed the partners to use profits from the latter to offset costs from the former.

Both fields are covered by the Deep Water Tano (DWT) petroleum agreement.

“The DWT agreement was signed once but the partners realised that they could develop two fields. Because they are in the same area (about 45 per cent of Jubilee is in the TEN area) and under the same petroleum agreement, you can offset the loss in one area against another’s profit.

“This is because the contract is for production area and not producing field and so when Jubilee turns profit in the DWT area, it can be used to offset TEN losses and that is why we will not also expect CIT from the Jubilee,” it said.

Prior to the commencement of production at the TEN and the Sankofa Gye Nyame fields, the partners of the latter had insisted that they were right to start recouping their investment costs from Jubilee profits.

Although the government disagreed, the partners continued to recoup the investments even as negotiations were deadlocked.

The source, however, explained that those deductions would now be refunded, in line with the requirements of the agreement governing the two fields.

That, it said, resulted in the payment of some US$22.1 million corporate tax by Kosmos after the Ghana Revenue Authority (GRA) had ordered the partners “to roll back all the deductions they made when TEN was not producing”.

The order followed an audit by the revenue administration and collection authority to ascertain how much had been deducted at the time the companies did not have the right to do so, the source said.

“There is a possibility that some payments will also be made next year. But when you are making projections, you do them based on current data, not on things that may or may not come, and that is why we did not budget for CIT,” it added.

Corporate tax from E&P companies has been an integral part of revenue inflows from petroleum to the state.

Since 2013 when payments started, some US$551.5 million has accrued to the state from CIT. The tax is 25 per cent of a company’s net profit.

It being held up to allow for the recouping of capital investments will, therefore, affect the amount of revenue the country makes from the petroleum sector.